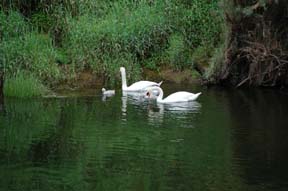 It has taken me hours (if not days!) to find my way around this site so as to fill in all the boxes with information and learn how to play with text and photographs. At last, though, I think I am sufficiently up to speed to start off . . . on the first day of a brand new month.
As befits our views on the relative importance of things, we felt that this scene of life on the river Wye that passes along the edge of our domain would get us off to an appropriate start. Actually it was taken earlier in the year but I can say that, in recent days, the parent swans and two of their cygnets (now in late adolescence, though less than a year old!) have been gliding happily around the same part of of our river.
Incidentally, the photograph was taken from our side of the river, which is in Wales. The bank shown behind the swans is, however, England.

Now we will get on with talking about books . . .