More about “The Abstract Garden” 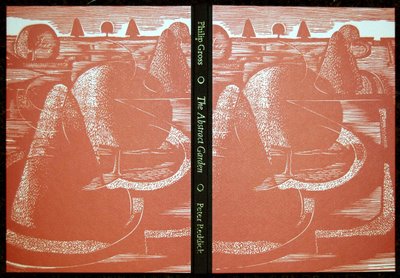 A little bit more about this lovely book, from the point of view of the participants. We have just sent out our prospectus so the book’s success (or viability!) is now in the hands of our loyal friends. An exciting moment but also one tinged with ‘last night blues’. Such is the pattern of our operation that Frances and I are usually working with a very much alive artist but with a dead or at least absent author. On this occasion, however, both roles were taken by artists very much with us . . . and what fun it was. 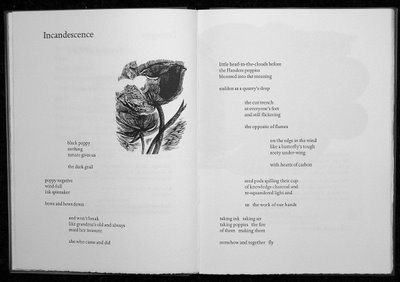 Summer lunches outside at Catchmays Court, I remember, as the plans began to form and emails from one to another and copied to the third. Always close the loop. When shall we three meet again? . . . Then the jokes, me as ‘the spaceman’ for my role as magician of the underlying grid which ordained where things should ‘go’ and which made it so that a title, let’s say, seemingly stuck in the middle of an open space, would nevertheless look just right.

On the Severn Bridge, which has (expensively) to be crossed by all seeking to go from Bristol to Monmouthshire, there are different ways to pay. You can pay an attendent, you can fling the correct money into a bin or you can prebuy some sort of season ticket. There are notices indicating where this last can happen – TAG. This, however, was the shorthand term for our book. I, for one, thought it a supremely romantic notion that there were signs on the Severn Bridge to The Abstract Garden! 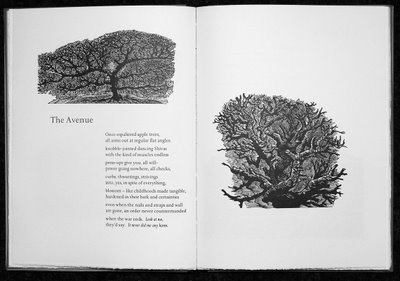 Another memorable moment in the process was when we had finally to put into order the poem/engraving units. Some spreads had to be confined to the centre of sections as engravings had been allowed to go over the gutter and I thought it best if we were to lay out all my paste-ups on the floor. They started in one room, went across a hallway and into another room. All concerned then paced up and down, poring over this river of paper, putting the case for this to come before that or after the other. All accomplished with the greatest good nature and ultimately successfully, we felt.

Such was my respect for Peter and his status as elder statesman of the wood engraving world that I was in terrible fear of falling too far below his standards when it came to printing. Each of the wood blocks was a dream to print. Some of the surfaces that had to be used because of the size of the subject in the context of the page were not so sweet, however, either for Peter to engrave or for me to print. In the end, though, I am quite happy and rather proud of how it all came out. The binding works very well, too, we all think. Ten copies with proofs of some images and autograph poems signed appropriately (below) will be prized possessions for a lucky few, although almost all have already been spoken for. 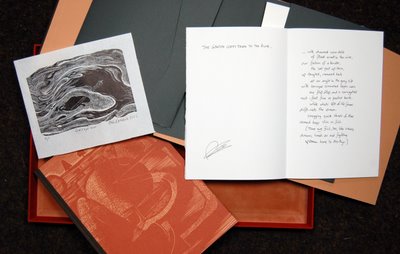 Great fun. Happy memories! . . . and now on to the next exciting venture!