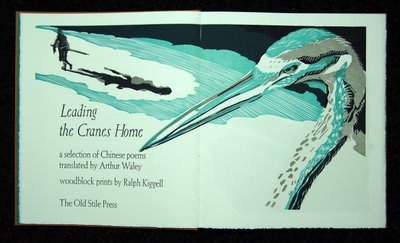 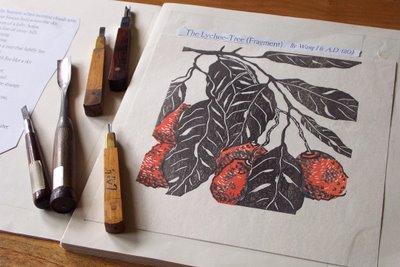 One of the star attractions on our stand at the LAB Fair, as we had fully expected, was Leading the Cranes Home, the collection of ancient Chinese poems (in timeless translations by Arthur Waley) with colour woodcut prints in the Japanese style by Ralph Kiggell . . . whose wood cutting tools are shown here when the book was at an early ‘paste-up’ stage.
Our meeting with the artist was a good example of the creative chance taking that has played such a powerful role in our history. A number of years ago, we were offered the lower exhibition space in the Fine Art Society’s gallery in London’s New Bond Street for a week. During that time we met a fascinating number of folk, some of whom had come along to see us specifically but many were just visiting the FAS. Among these was Ralph who had come to London to visit the Print Fair at the Royal Academy and just happened upon our books.
He was interested in what he saw and we ended up talking for most of the afternoon!