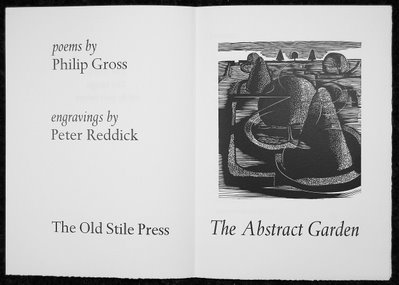 SOME of Britain’s most beautiful books are being produced from a rambling old house beside the River Wye just down- stream from the village of Llandogo.

Nicolas and Frances McDowall have been running the Old Stile Press there for 20 years, and while feeling they’re “the luckiest people in the world” in doing so, they are also playing a major role in promoting and encouraging many of the country’s most talented artist-printmakers.

An Old Stile book is a bringing together of words by writers living or dead with illustrations created through wood engravings, woodcuts, linocuts and other relief blocks, with Nicolas McDowall’s skills in page design the third vital ingredient. Nicolas, now 69, can look back on a lifelong love of fine books and years in mainstream publishing as part of his long “apprenticeship” while Frances looks after all the sides of the business that do not involve page-preparation and printing.

An early inspiration was John and Rose Randle’s Whittington Press, then in the Cotswolds near Cheltenham and now based in Herefordshire. The McDowalls started Old Stile from their London home in Blackheath, but it has been since they moved West that it has grown in stature to where it is today, with a list of some 50 volumes and a customer list that has taken in the British Library, Cambridge University, the Museum of the Book in Amsterdam and a score of United States collections that take in the university libraries at Yale, Harvard, Johns Hopkins and UCLA.

Books tend to be in limited editions of 150 to 350, and they can cost hundreds of pounds. Raw materials are of the best, with price tags to match, and the binding, which is done elsewhere, is always superb. Stemming from a visit to the paper-makers of Wookey Hole, Frances has experimented imaginatively and exuberantly with papers of her own, some of which have been used in occasional books. Her onion paper has been described as “almost edible”. Nicolas is not precious about the use of mechanical aids. For years, most of the typesetting was done by the late Bill Hughes, of Upton-upon-Severn, on a Monotype machine, and now he does it himself on computer, using grand old typefaces such as Bembo, Bulmer, Blado and Baskerville. The settings are printed down to polymer plates and hardened by ultraviolet light to produce line blocks, after which printing is done on a proofer which, while automated, still calls for personal attention to every sheet. Like most enthusiasts, the McDowalls have a range of weird and wonderful printing presses in their collection, including the most glorious of them all, a mid-19th-century Columbian, complete with golden American eagle, but it’s much more run-on-the-mill equipment that does the lion’s share of the work. 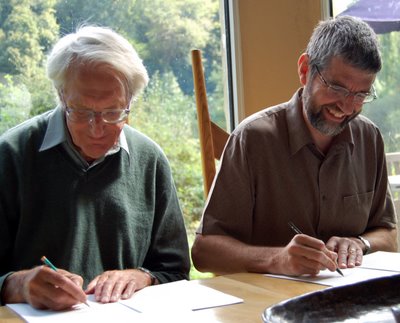 Just out from Old Stile is The Abstract Garden, a joint project between two of Bristol’s most distinguished artists, the poet and novelist Philip Gross (right) and the veteran wood-engraver Peter Reddick (left).

Philip says: “I’ve known Peter for quite a few years. We’re both members of the same Quaker meeting at Redland, and we’ve always liked and admired one another’s work and talked about working together.

“It never quite happened, but when the Old Stile Press asked him if he could think of a poet’s work he would like to produce a book of illustrations around, he came back with me.

“We told them we wanted do new work on both sides, responding to one another. We couldn’t know at the start what it would grow into in the end, but we both had this garden concept we wanted to explore. An active ingredient in the book’s creation

“The creative process worked both ways. He has done images starting from early drafts of poems of mine, and I’ve written on what I’ve seen, or best of all, I’ve looked around in his sketchbook and written about a sketch which has then influenced his eventual piece of work.

“It’s taken a couple of years. Nicolas McDowall is an artist in his own right, an active ingredient in the creation of the book. There’s a poem in it which uses the phrase ‘the word, the image and the space between’. The end result is an object of art in its own right, one that will last for hundreds of years.”

Peter Reddick is best known to many people for his illustrations to the entire Folio Society series of Thomas Hardy’s novels, and he was also commissioned to design covers for a number of Penguin editions of the novels of Daphne du Maurier.

Born in 1924, he was senior lecturer at Bristol Polytechnic between 1967 and 1989, was a founder member of Bristol Artspace and is chairman of the Spike Island printmakers’ workshop on the Bristol dockside. Long admired as an artist by Nicolas McDowall, who also shares his Quaker philosophy, Peter Reddick joins a long line of brilliant contemporary artists to be showcased by the Old Stile Press. Few are household names, though many readers will remember the work of Robin Tanner, the Wiltshire engraver who played a significant part in the early days of the press.

As for Philip Gross, he joins a list of writers for Old Stile that ranges from St John to Ted Hughes, Shakespeare to Edward Lear, Oscar Wilde to the Brothers Grimm, all presented in a way never encountered before. Nicolas McDowall has particularly fond memories of the Ted Hughes project, a collection of his nature poems illustrated by Reg Lloyd. 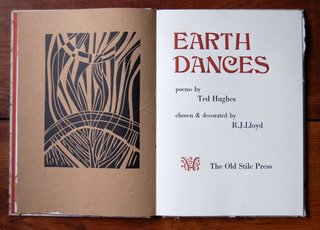 Hughes, then poet laureate, wrote an extra poem expecially for the book, and Nicolas still remembers the thrill of typesetting it for the first time, the first time anyone other than the poet and the artist had seen it. It’s one of a thousand memories he and Frances share – and they plan to keep on adding to them for many years to come.