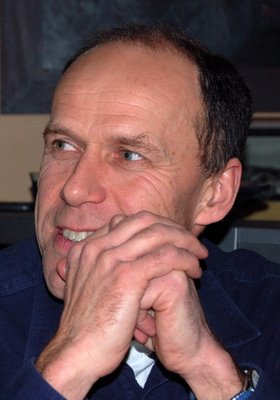 As a recent visit here allowed me to take a photograph of our long-standing friend, Harry Brockway, I thought I would embarrass him by putting up a selection of lovely things that he has done for and with us over the years.

When you see examples of his work in his two media side by side, the style and particular character of the artist is clearly present in both and is of the same order . . . and yet some people appear surprised that the engraver is also a sculptor and vice versa.

There are, happily for us, ‘signs of Harry’ all around us. As you enter our domain, it is Harry who confirms that you have reached the right place. Below this elegant letter-cutting there is also our press-mark carved but the undergrowth seems to have taken it over! 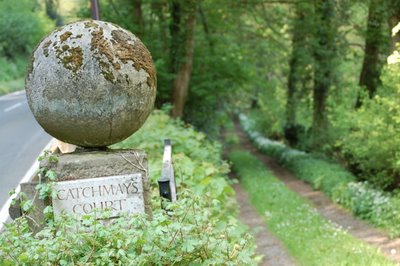 When this fountain ‘mask’ was being thought about, I felt it would be fun if it could be seen as a combination between a ‘green man’ and one of those winged putti who pout their lips to blow winds from appropriate directions on ancient maps. Harry got the idea perfectly and a good number of years have given a wonderfully ancient and, yes, romantic feel! 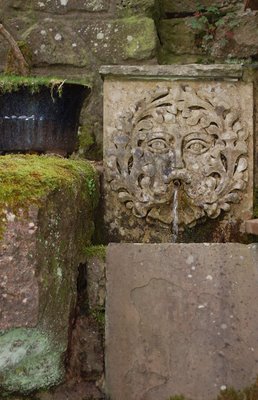 The deliciously carved figure below is an early work and it has been with us decades. It is a full-length figure though less than life size. The dress is simply the wood painted white.

You may be able to see, incidentally, tucked between the uplifted arm and her cheek, a small tube like object. This has nothing to do with Harry but has a rather enchanting history. Many years ago Matilda (then about 10), the daughter of Sara Philpott (but that’s a whole different story! See here and here ), came with her family to spend a summer day with us. We heard later that she had been a bit shy to say to us how much she had enjoyed the time so she took a piece of ‘paper’ from a paper-bark maple in the garden, wrote a sweet note on it and slipped it into the safekeeping of Harry’s figure. It is, of course, still there carefully preserved in its niche! 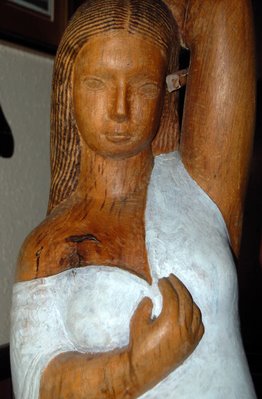 The Lad Philisides has always been a special favourite of mine. In the planning stages, we looked together at wood engravings and etchings by Blake, Samuel Palmer and, particularly, Edward Calvert and also some of the contemporary and near contemporary followers, such as Robin Tanner, Paul Drury and my favourite neo-romantic painters. How well Harry got into the spirit of these artists when it came to these poems by Sir Philip Sidney. 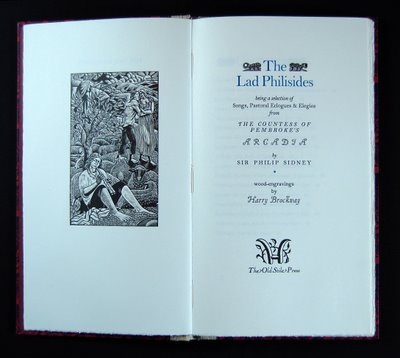 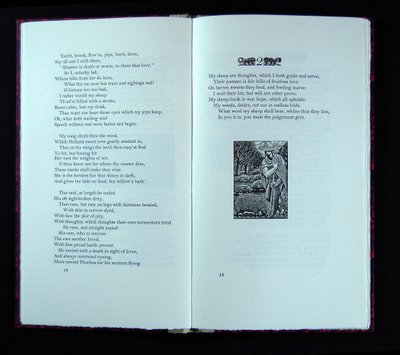 There are, I think, just two or three copies of this delicious book left – though I have to confess that I am staggered that they have survived thus far!

Harry’s second book with us, Faithful John was much later and there are also copies of this remaining – even some of the Special Edition, I believe. His treatment of this powerful and resonant fairy-tale continues to amaze me for its technique as for its content. Not everyone knows that we started with the ‘challenge’ of him designing and engraving (and me incorporating into a page design) these bizarrely shaped blocks which in fact remained to him after stock-sized blocks had been cut down to size for one of Harry’s many commissions by the Folio Society. Constraints always make for excitement. 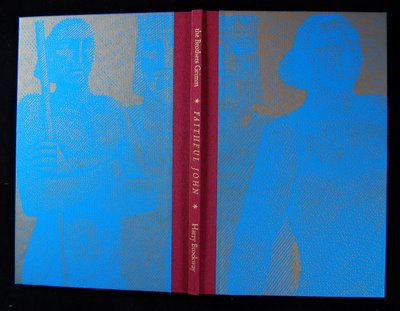 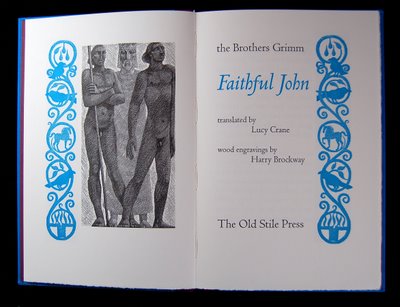 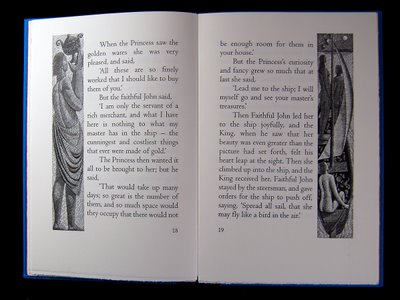 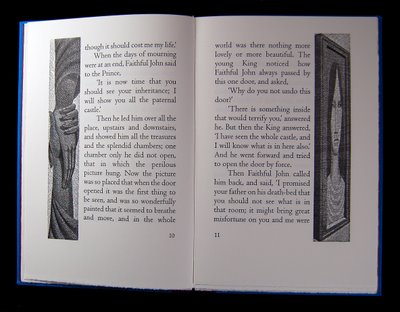 We are in the process of trying to plan another project together. I cannot wait!