For the Christmas after our great friend and guru, Robin Tanner, died, I made a card by ‘pasting-up’ various of the delicious decorative elements he had added to an earlier Christmas letter. 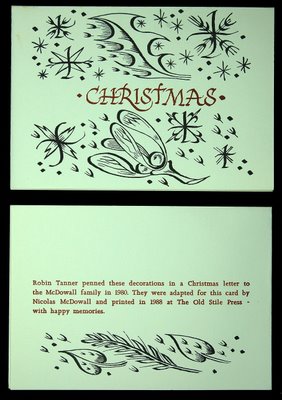 A second ‘Robin Tanner’ created card was made for Christmas 2004 associated with the extraordinary coincidence of our hearing about, acquiring and reprinting a book in which Robin had made many drawings in black ink within a printed copy of The Last Poems of Alice Meynell, just in time to celebrate the centenary of Robin’s birth! 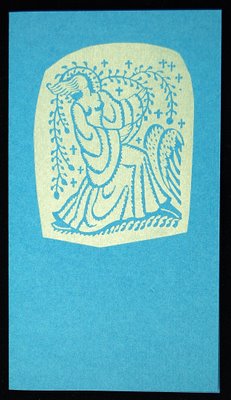 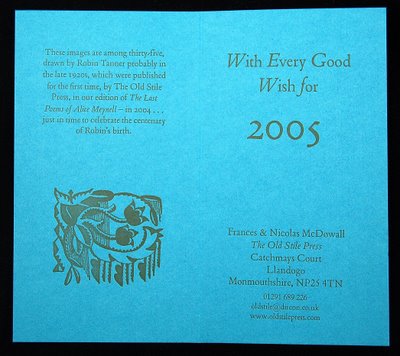 In quite a different mood, here is a card made from the drawings made by Gillian Martin for the two half-title pages of our edition of Edward Lear’s Two Nonsense Stories . . . one starts at one end of the book and the other starts at the other – hence TWO half-titles! These stories (so much less well-known than the Poems, Alphabets &c) are entirely delightful. Looking again at the drawings in the book, it is amazing how Gillian managed to draw entirely in her own style but in a way which looks almost more Learish than Lear himself. Why has Gillian not done another book with us . . . ! 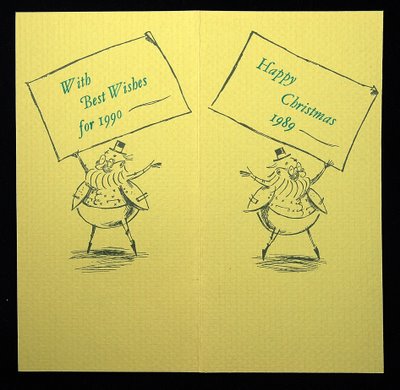