Back from San Francisco!

Hi! This is Frances, for a change.
You might get the idea from all the swans and sheep that life is rural and gentle at The Old Stile Press. However, this last month has been hectic and full of contrasts for me. First, the Works on Paper Fair at the Royal Academy where we met an amazing number of people, most of whom were unfamiliar with the book as art, or even a repository for art. For a long time we have endeavoured to find opportunities for our books to be seen together with works of art not just among books and this proved to be all that we had hoped. Many of the visitors to the fair were hugely excited by the books they encountered (not just ours) and bought enthusiastically. The logistics of getting ourselves and books to central London at short notice and then staying for five days took some considerable effort and then back to base to spend a day wrapping and despatching a large number of parcels before setting off to California. So I set off on a high, though exhausted.

I should have known – but it was nevertheless unexpected – I left Britain in snow ( and Nicolas has some horror stories involving being snowed in at home alone, fallen trees and chainsaws) and arrived in California in rain. When it rains there, it really rains although it had waited for two dry months to tip it all down on my head! My destination was Berkeley (the University Campus was alive with anti-war protests, drumming and singing in the main plaza) where printers, book makers, librarians, collectors were coming together for a symposium and book fair for four days prior to the world famous San Francisco Antiquarian Book Fair. The contrast was great and discussions changed gear because all these folk were deep into books, their history, the way they are produced, presses and the intricacies of their productions. The way they all looked at books was so different from the buzz generated at the Academy. That is not to say there was no buzz here too but of a very different nature. Many of the books produced by Californian artists explore structures and are many layered in terms of imagery and printing method – often startling and eye-catching and make our books seem very cool and spacious. At first I thought this was going to mean that no-one would choose to buy from us – however, on the third day that changed and we sold to some very enthusiastic people. During the course of the event, however, I had the pleasure of meeting librarians and collectors who had previously only been august names. 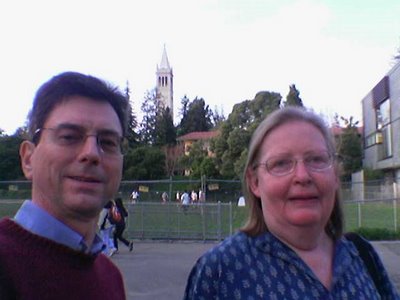 Martyn Ould’s mobile phone captured this shot of us with the Berkeley Campanile behind us – he was showing his Old School Press books and there were six other British presses who made it over to California. In all, there were about a hundred presses showing their books, with a sprinkling of papermakers and leather suppliers for bookbinding. It was a remarkable gathering and evidence of a healthy interest in the creation of books – but one of the questions posed was whether an art is dead if it is only appreciated and bought by its creators. The works shown would certainly demonstrate vitality in the huge variety of approach to the creation of books. Coincidentally, the vitality is best demonstrated by the much greater interest shown in books at the Royal Academy show where the buyers were certainly not makers. They did, indeed, find it of added interest to meet the makers rather than the more accustomed (in that context) gallery owners. 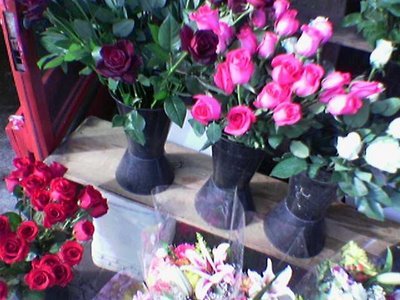 Valentine’s Day found Berkeley awash in flowers – everyone seemed to be giving and receiving bunches of roses, or a single flower . . . no more the faltering anonymous card sent to the seemingly unattainable person of one’s dreams. Far distant from our partners, Martyn and I had the brilliant thought of taking a photo which could be sent by e-mail to each partner. N had the effrontery to wonder if the roses were on a garage forecourt – hey, they were the most flamboyant in town! Having said that, the flower shops themselves were not what astounded me, but the green of Berkeley and the profusion of growth. Yes, there were daffodils, primula and tulips but also arum lilies, agapanthus, roses, caeanothus all of which grow almost wild on the hillsides and huge Magnolia grandiflora, eucalyptus and pines – how do they know what season it is there! I managed a trip around the bay to see the skyline of San Francisco and its bridges. The photograph might seem stagy but it really was that glowing orangey-red with dark outlines of bridges and islands and distant mountains. Overwhelming, especially on top of such an outpouring of books and conversations with the people who made them . . . at breakfast and every moment throughout the day!