or A Treatyse displayeing the Chiefe Curiosities as they are in Use among the diverse of the People of Scotland to this Day by Mr Robert Kirk, Minister at Aberfoill 1691

Stare into a pool -- the wind ruffles its surface, a cloud passes over - the reflections shift and change. A fish jumps and sends a cascade of ripples moving ever outward. So Angela Lemaire's imagery, cut in wood sometimes with great delicacy, sometimes more roughly hewn, reflects the the intricacies of the 'curiosities' and 'singularities' of Secret Commonwealth.

Seventeenth century Scotland was still unsure of the relationship between church and the older beliefs which included second-sight and faery. Nothing Victorian and pretty here, but the attempts to understand the supernatural involved in the underground world which has its own laws of nature. Fertility was inexplicably from below. Pre-historic chamber tombs were intertwined with fairy hills. The shadows in the darkness became people walking beside you -- some with good intent, some not.

The book seeks to explore these worlds in imagery and text. Robert Kirk's text is one of the most important ever written on the subject and Angela Lemaire's Afterword puts the work into context . . . while her woodcut images brilliantly achieve the logically almost impossible task of showing, or half-showing, something which seems only half there, or is not there at all! We are thrilled with way this book has turned out. Its large format and noble proportions are shown off by an almost full-leather binding which, however, has itself been colonized by Subterraneans!

The black and white images of the Main Edition look very fine printed on the paper which was specially chosen to give a feeling of antiquity suitable for the text. Such was the delight in and demand for Angela Lemaire's hand-coloured edition of her Thomas Traherne book Joys, however, that we asked that she take up her brushes again. She has done quite wonderfully but, because of the vast labour involved, this special edition is limited to just TEN copies for sale. 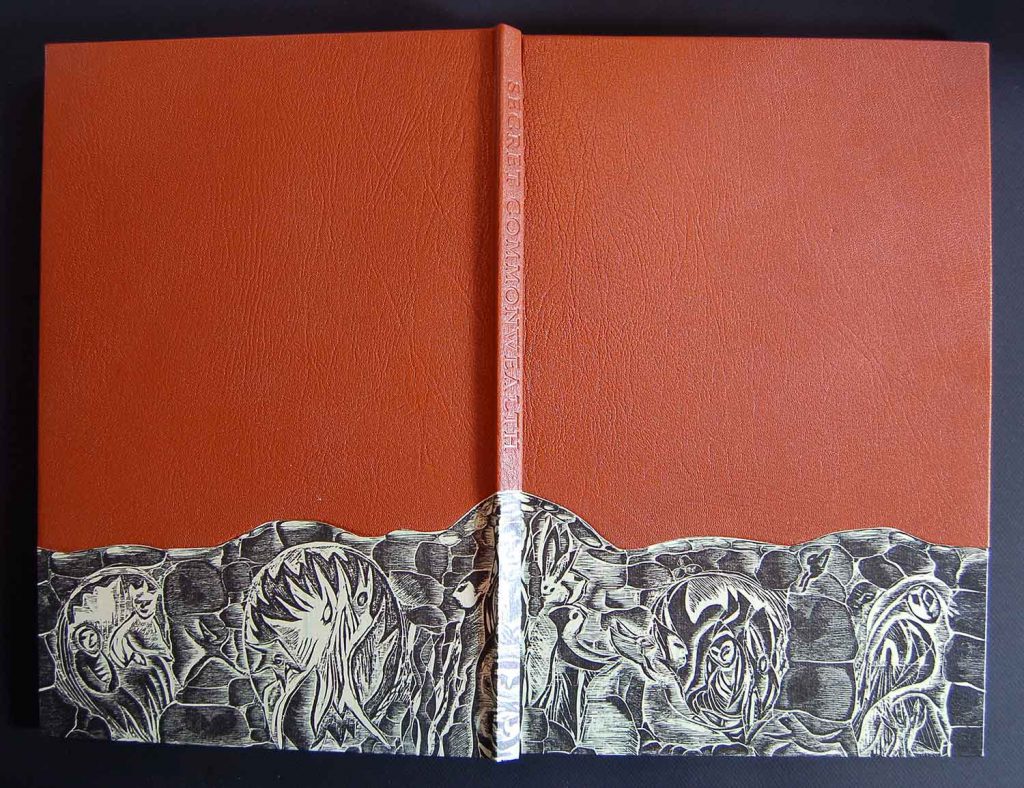 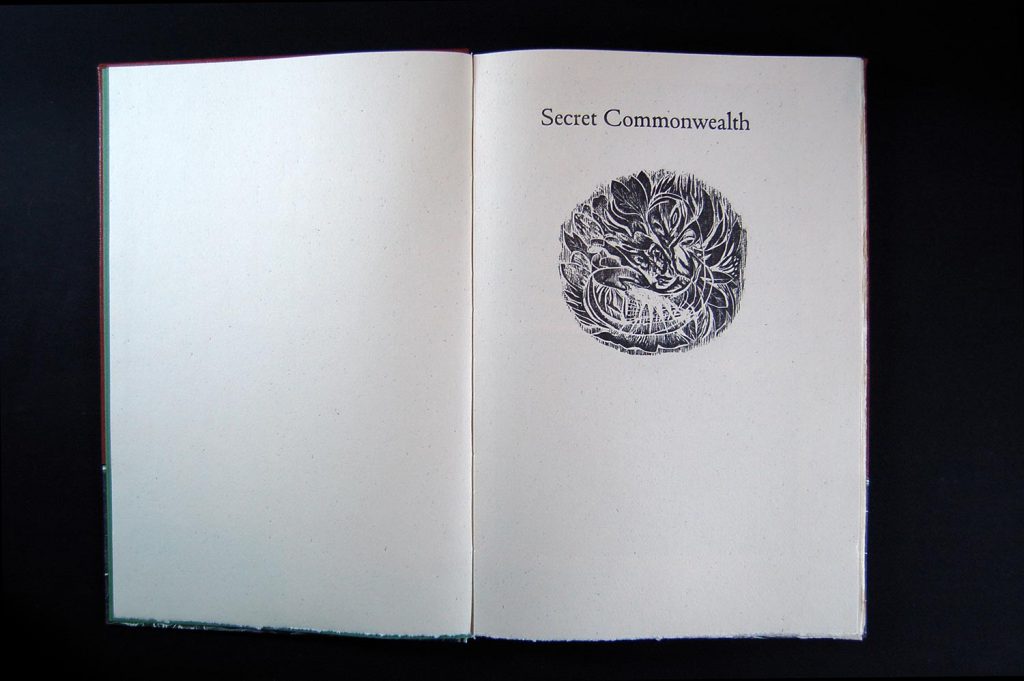 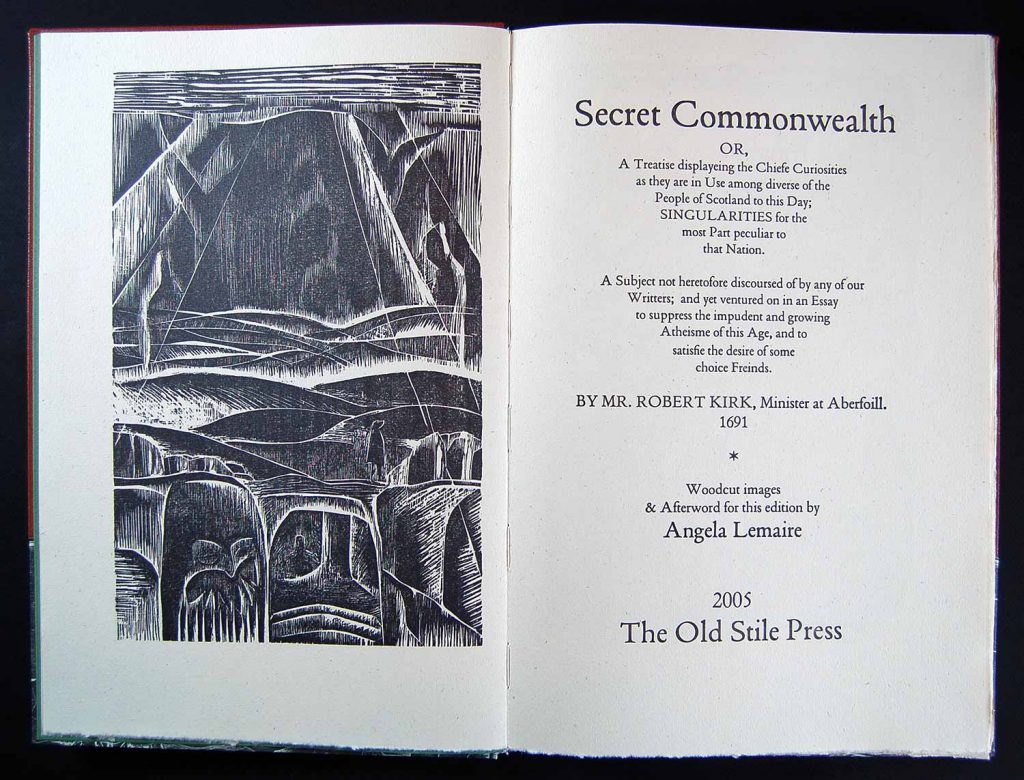 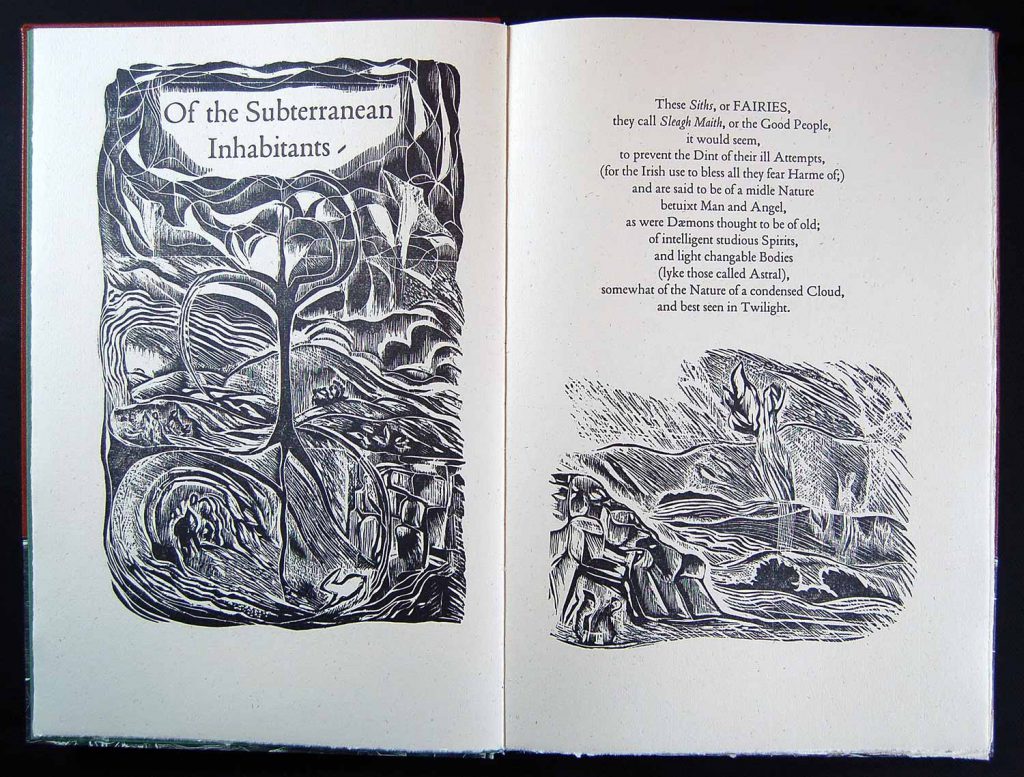 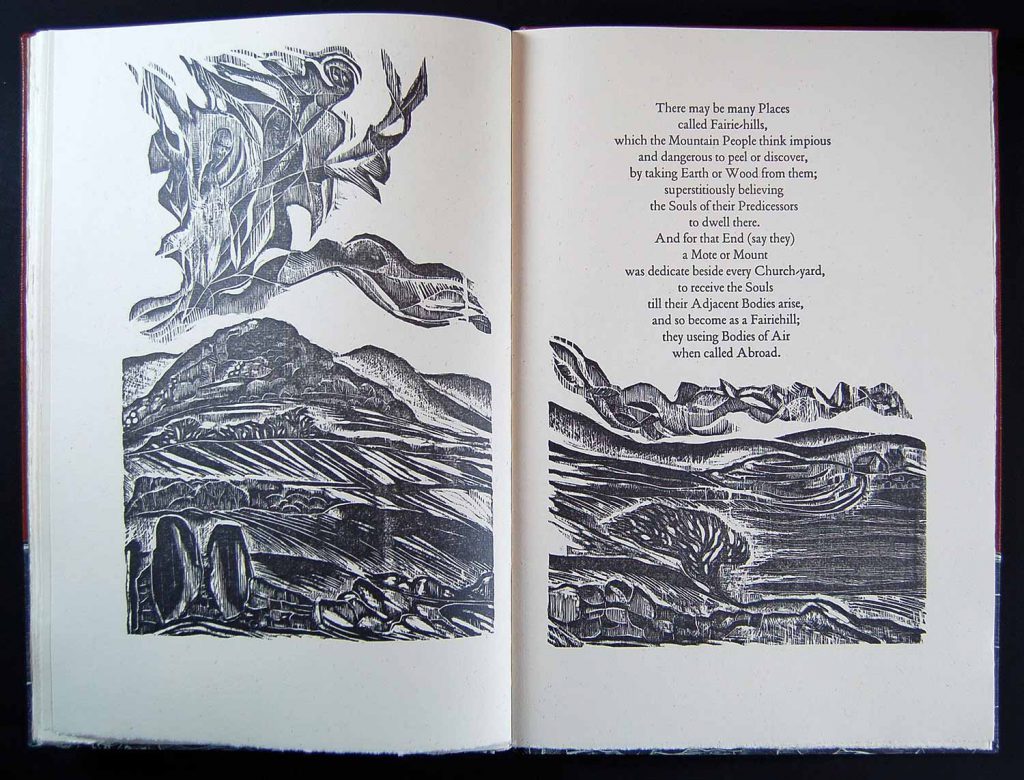 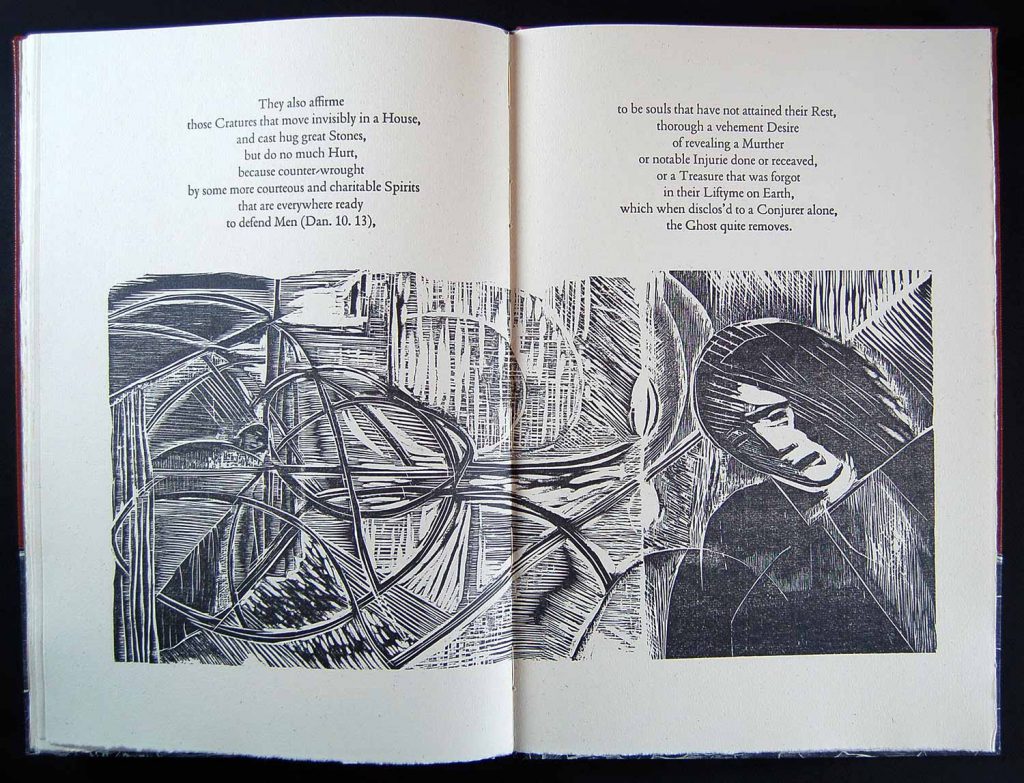 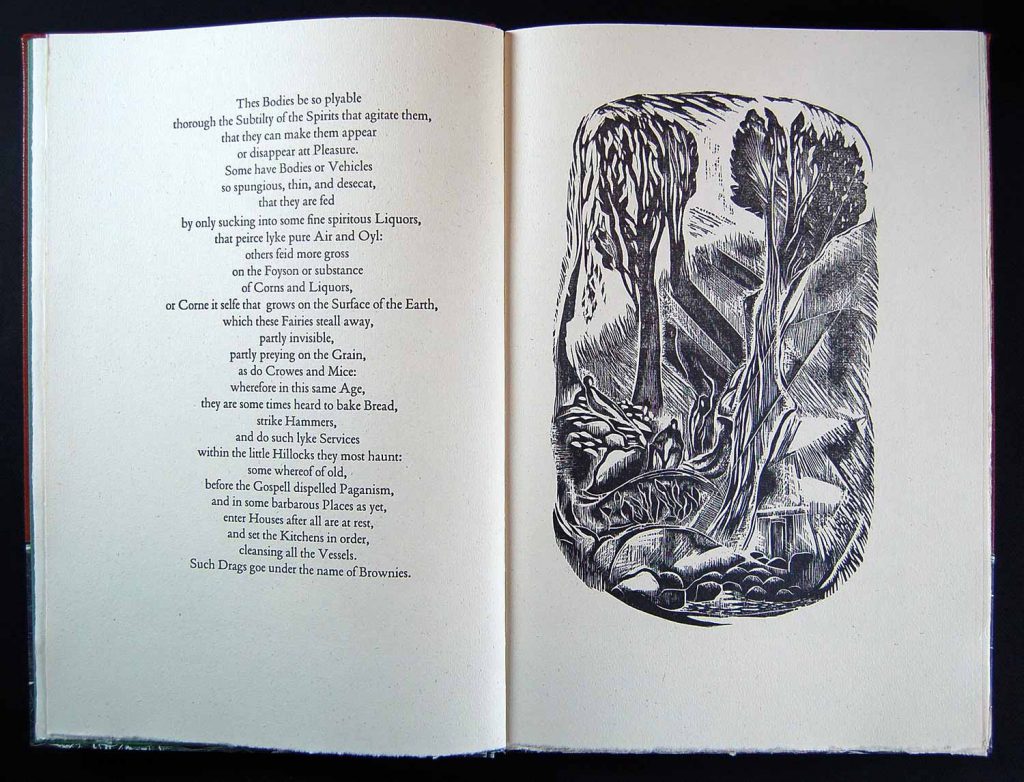 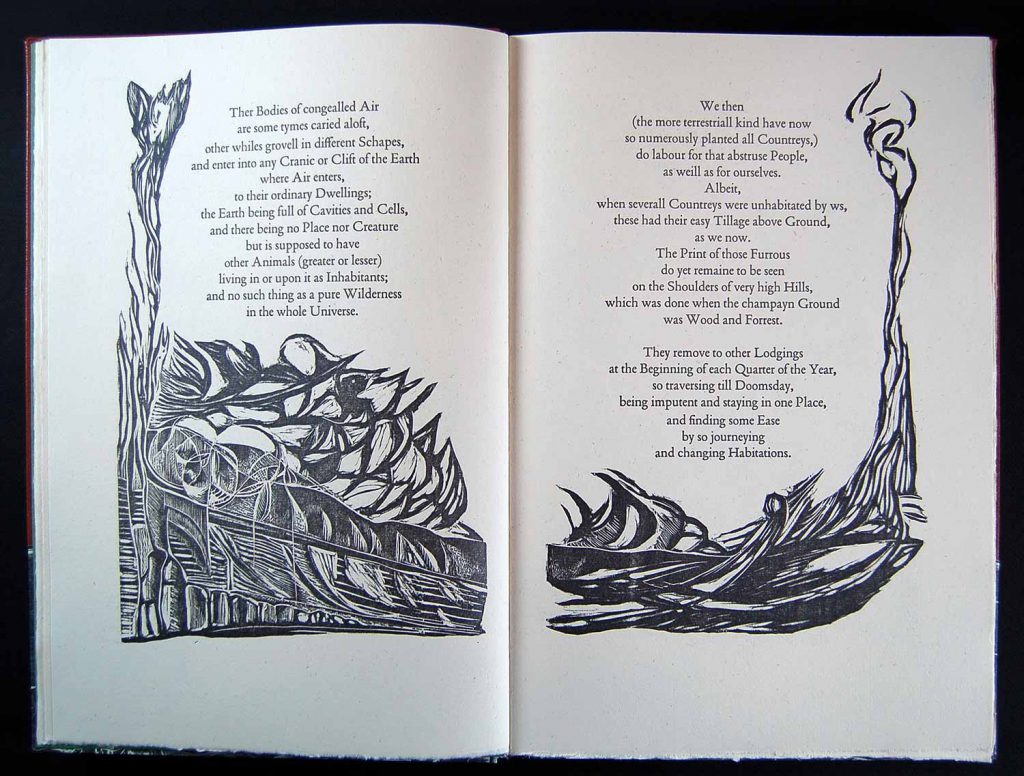 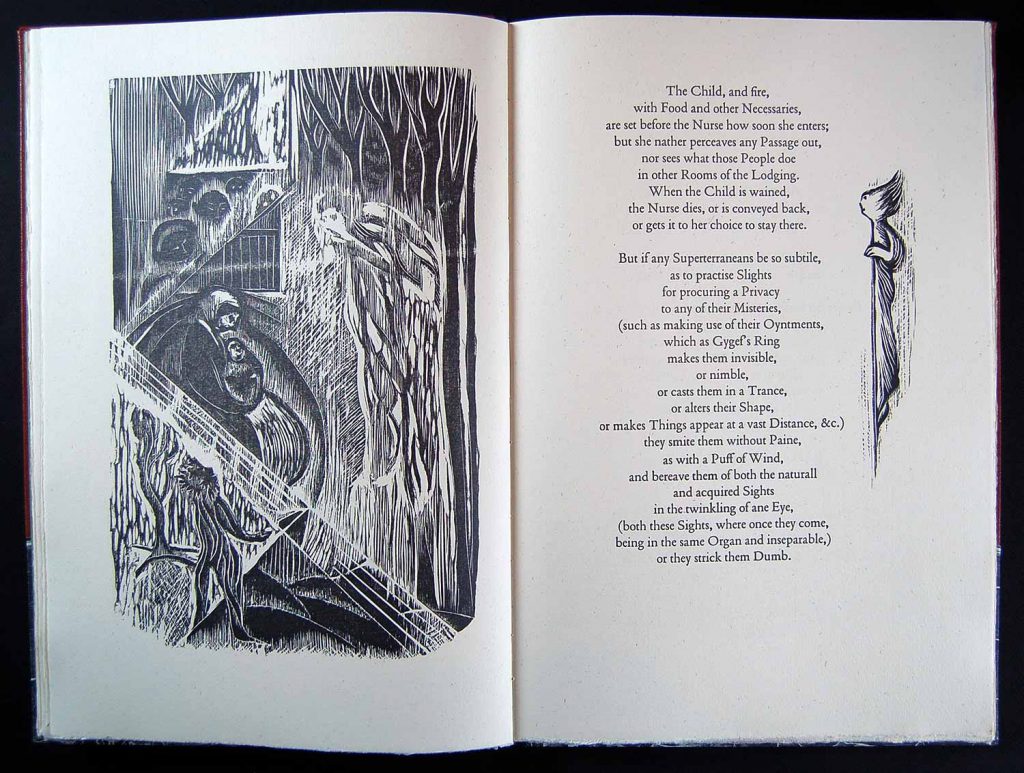 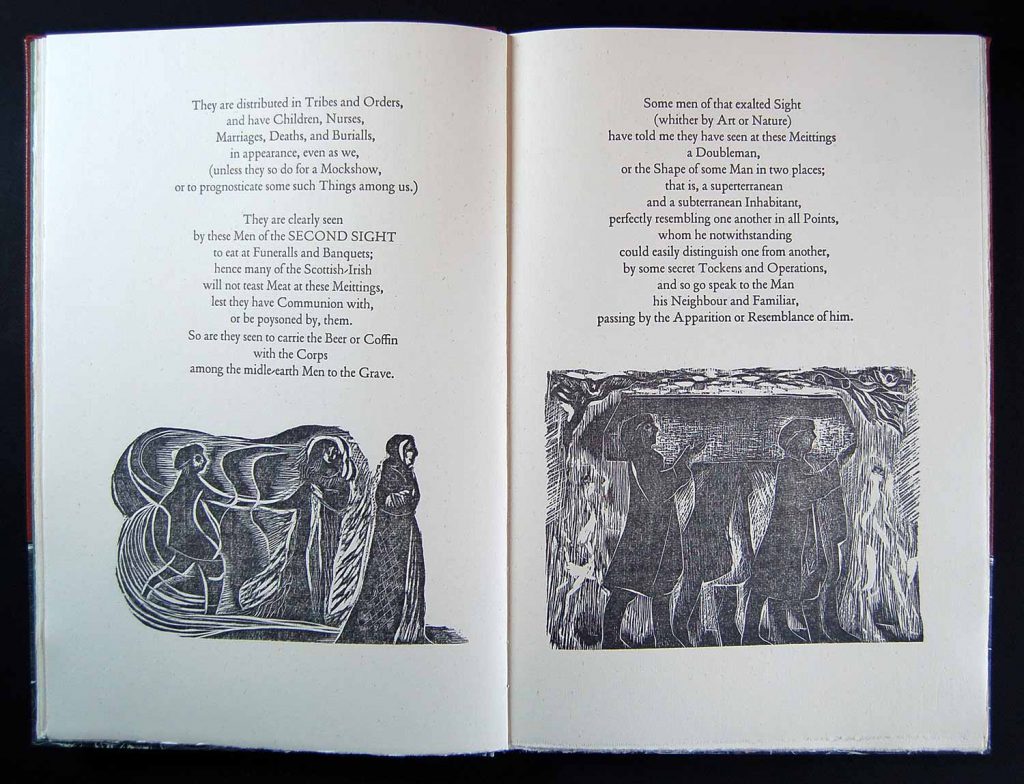 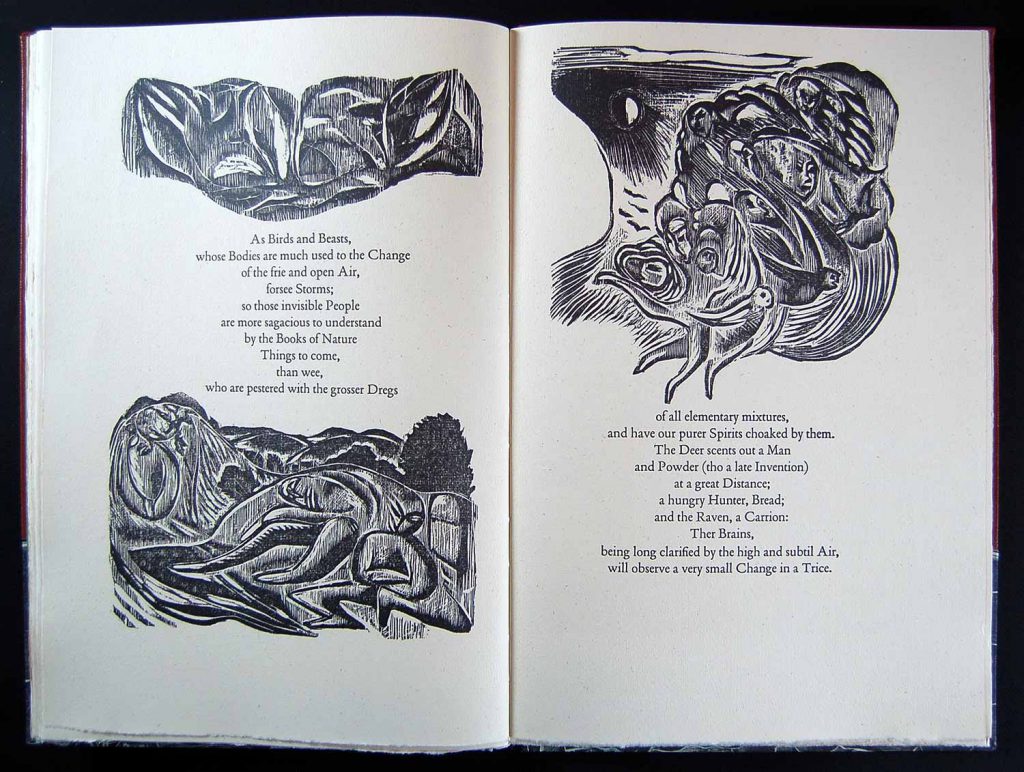 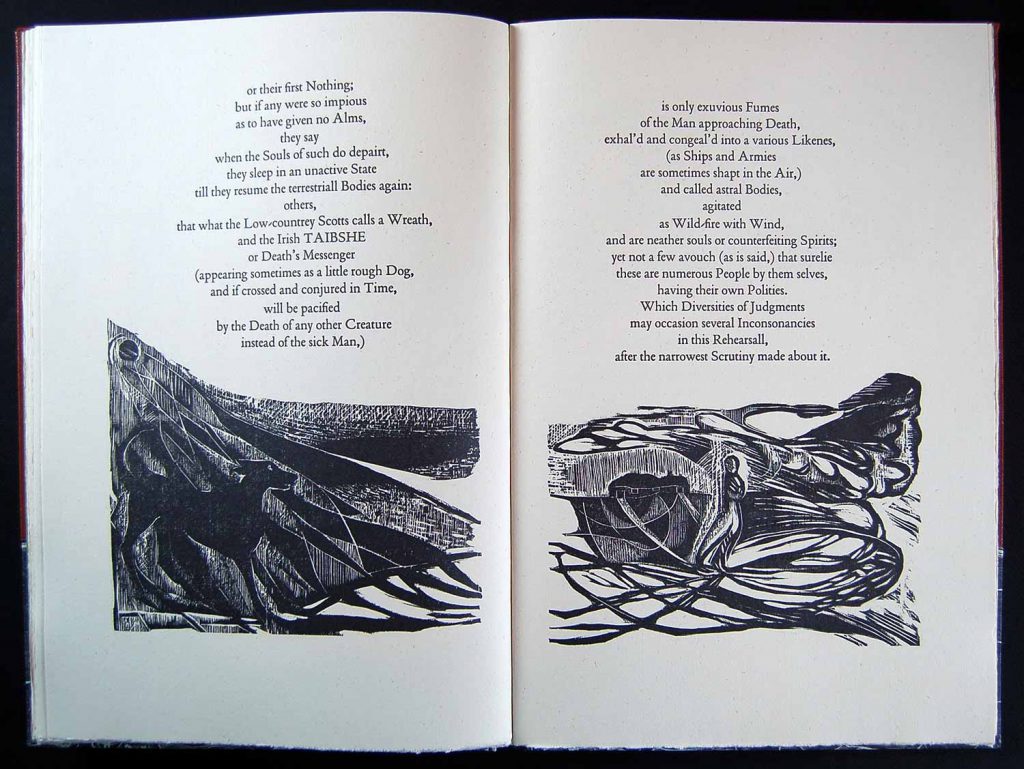 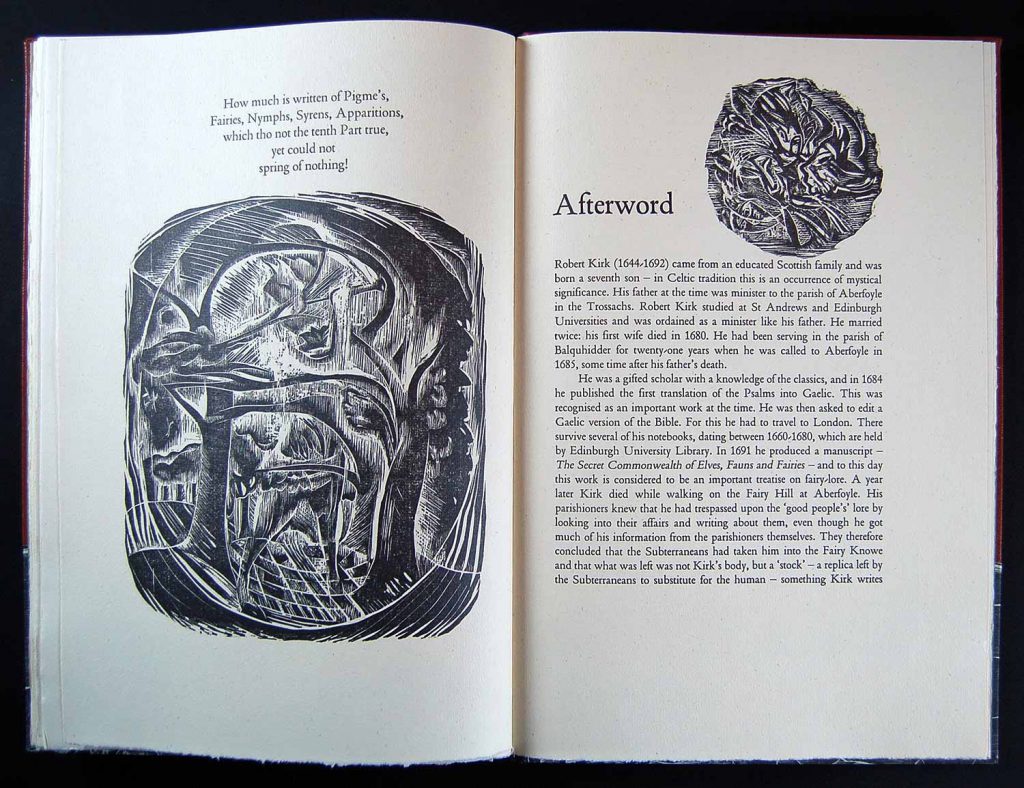 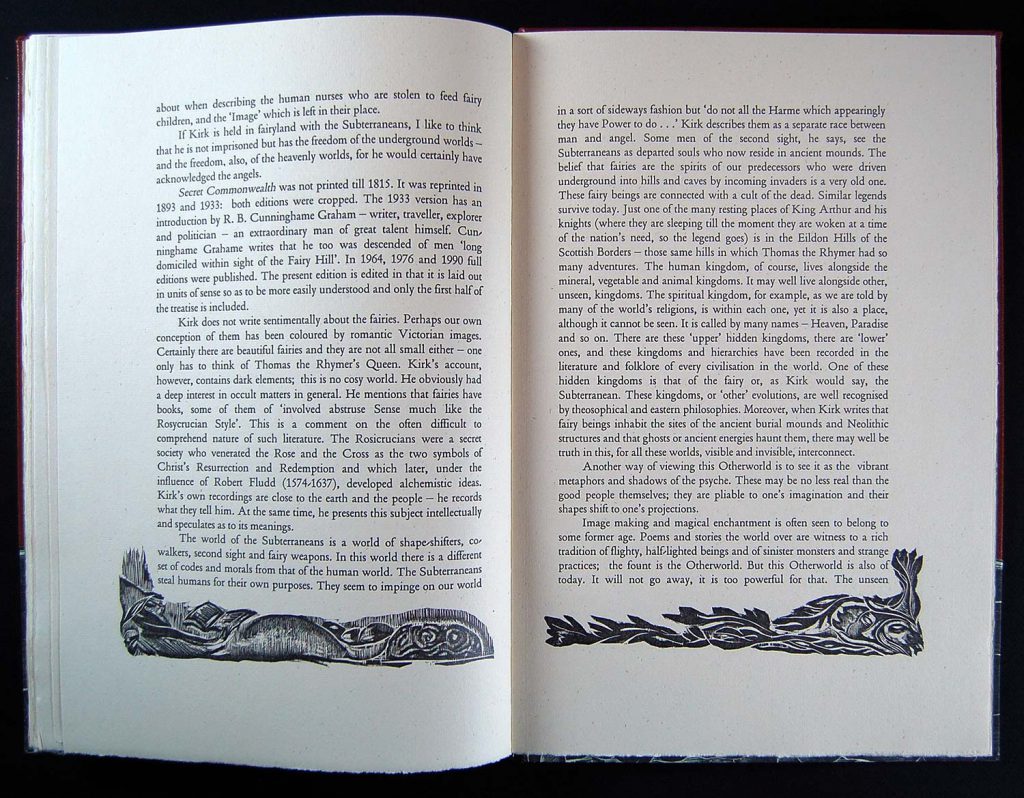 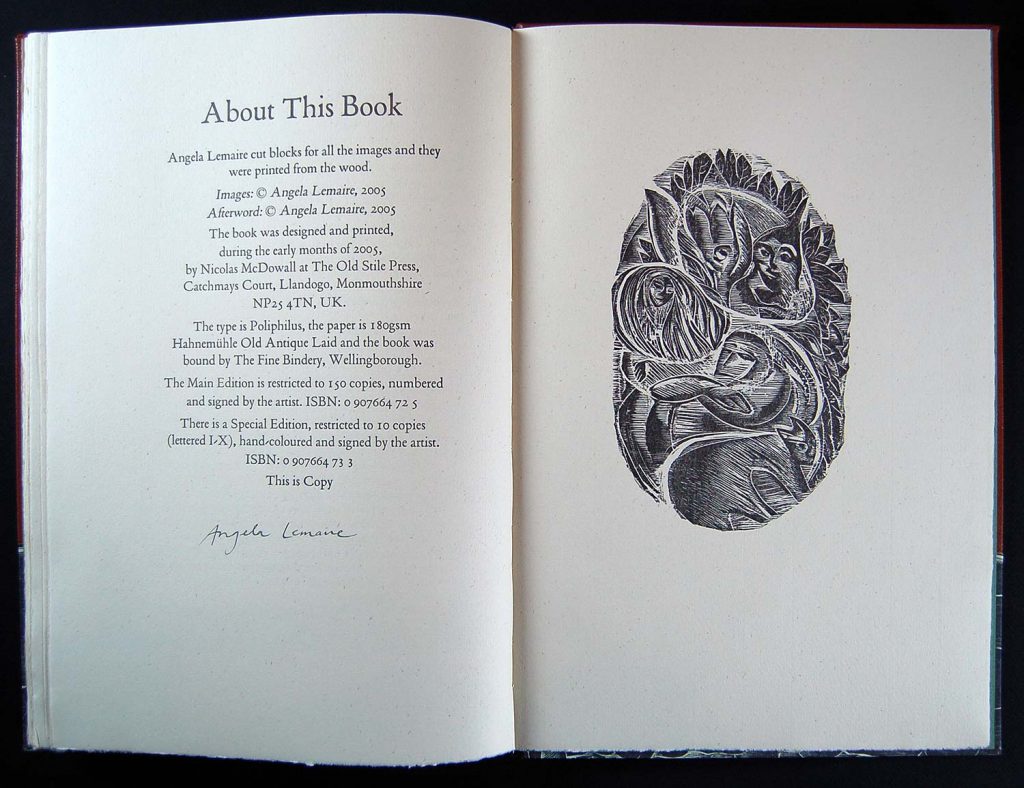 Poliphilus type, with Blado. Paper is 180 gsm Hahnemuhle Old Antique Laid. All Angela Lemaire's woodcuts were printed from the wood. The binding, involving almost full-leather covering the case but with additional printed paper designed by the artist, is by The Fine Bindery.

150 copies were printed of the Main Edition and copies are available to buy at £275 each.

Only 10 copies were printed of the Special Edition